US methods of suicide

In the USA, there are three particularly popular methods of successful suicide: firearms, suffocation/hanging (likely to be largely hanging, but will also include carbon monoxide poisoning) and poisoning (commonly by drugs). Naturally, in the US, firearms are much easier to come by than other countries, hence their relative popularity in the US as a suicide method. 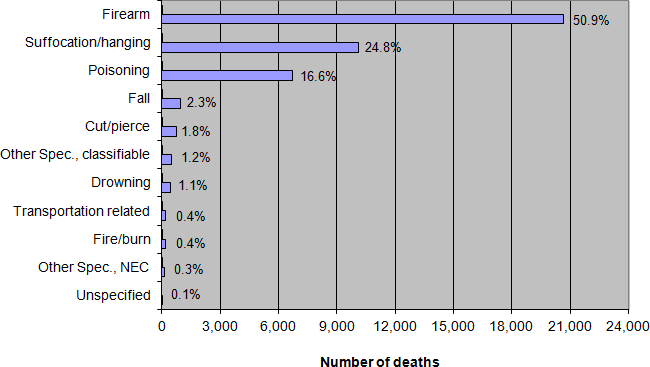 When it comes to successful suicide in the US, men account for 78% of all suicides. The popularity of the methods used also varies a little between the sexes. Whist for men firearms are by far the most popular, followed by suffocation/hanging and poisoning, women have poisoning as their most popular method, followed by firearms then suffocation/hanging. Given firearms are the most reliable method, and drug poisoning one of the least successful, that may account for some of the difference in actual suicide rates between the sexes. It is also interesting to note that women have 45% more non-fatal self-harm incidences than men.

The table below shows the relative popularity of each suicide method for both men and women in 2012. The top three methods account for over 90% of all suicides in the USA.

*Of the poisoning deaths, 81% were ingestion of drugs and 15% were gas inhalation. A full breakdown of these deaths can be found in Drug poisoning in the US.