In England & Wales (figures compiled separately for Scotland), methods of suicide are more evenly spread than they are in the US. With firearms much harder to come by, that method is not surprisingly lower down the list. That aside, the other top methods in England and Wales are the same as in the US - hanging and poisoning.

Deaths by self harm and undetermined intent in England & Wales 2011 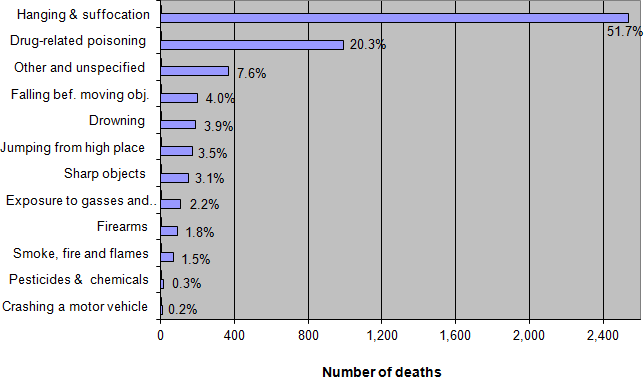 Similar to the US, 75% of all suicides are men, and this proportion has remained fairly constant since 1991.

Methods of suicide between women and men is very different in the UK. Poisoning is more than twice as popular in women than men, with women choosing hanging much less than men. Very few women in England & Wales use firearms to kill themselves, and there are also much fewer deaths from exposure to gasses. The table below shows the breakdown for men, women and all adults.

The above figures include data on deaths with "undetermined intent". Most deaths in this category are investigated by an inquest whose finding was an open verdict due to insufficient evidence to record any other conclusion. Research in to deaths from injury and poisoning with an open verdict suggested that the commonest other verdict under consideration was suicide. As a result, these deaths are usually grouped together with those categorised as suicide to give a more realistic estimate of total suicides and deaths from self-harm.